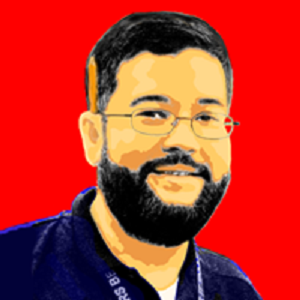 Mr. Glass has been a teacher for over ten years, and is currently the Science Instructional Dean at Roosevelt High School. He is certified to teach science as a secondary school teacher and has degrees in multidisciplinary science, chemistry, and assorted certificates. He brings to the classroom his experiences as a freelance Web designer, a Texas Master Naturalist, a laboratory research assistant, and a corporate manager, where he spent just as much time listening to young people and their concerns as he did with performing administrative duties. Mr. Glass was also named Time magazine's 2006 Person of the Year.

He really enjoys teaching, learning, and exploring our natural world as well as books, music, film, photography, and a certain Gallifreyan from the constellation Kasterborous.

After growing up in a military family and living around the world, Mr. Glass moved back to San Antonio and to NEISD, the place where he went to high school. He is really, really lucky to be married to his best friend of over twenty years. Together with their young son, they are voluntary participants in a long-term experimental ecosystem consisting of three humans (Homo sapiens), three cats (Felis silvestris catus), eight fish (Carassius auratus, Paracheirodon innesi, Pseudacanthicus spinosus, and Xiphophorus helleri), eight shrimp (Neocaridina davidi), two mud fiddler crabs (Uca pugnax), thirty-two plants (mostly Lamiaceae), and two unidentified species of snail.