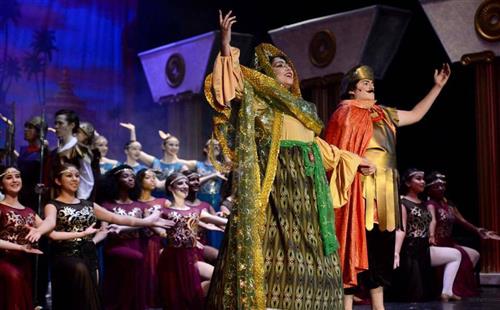 First-year students alternate between acting and voice on a 3-week rotation throughout the year. You will train in the fundamentals of the techniques of acting, with focus on ensemble work, relaxation, imagination, beginning voice/movement work, improvisation, connection, trust, monologue preparation, and stage make-up. You will view and research important actors of the 1920s, 30s, and 40s, observing the changing acting styles of the time. You will learn how to read plays and build a specialized vocabulary necessary for the discussion of dramatic analysis, critique, and performance work.

You will train in Shakespeare/Verse, with specific focus on scansion, characterization, breath, style, monologue, and scene work. You will study and analyze the great classical performers through film and audio recordings. You will also study Shakespeare's life and the Elizabethan world.

Seniors who plan to audition for college BFA training programs can take this course for intensive work on the specialized skill of auditioning. You will prepare 6 monologues from three different areas: contemporary, modern, and classical plays.

Any NESA major can take this elective. You learn and practice the technique of acting for the camera. Semester 1 focuses on the study and creation of silent films, while semester 2 moves to the use of spoken dialogue. You will observe the work of major film stars of the 20th century and research the historical area that their work reflects. In addition to performance, you will also storyboard, film, edit, and score class film projects.

First-year students alternate between voice and acting on a 3-week rotation throughout the year. In every 3-week unit of voice, you will learn and perform a new song. We will work on vocal fundamentals with an emphasis on posture, breathing, and vocal placement. Students will also learn beginning music theory to include solfege and key signatures, and how to utilize these skills for sight-reading. We learn the physical, mental, and emotional characteristics of vocal technique as well as an introduction to key signatures, rhythmic indentification, note names, and lyric analysis.

Second-year students will receive vocal instruction on a semi-private level. You will learn in small groups of similar voice type on a weekly basis. Every 9 weeks will include a class performance. Grades are assigned on preparation, technique, and expression. In addition to singing, students will continue to build their sight-reading skills as well as an understanding of tempo/dynamic markings, text analysis, rhythm proficiency, and musical theatre history, for which we will read from several textbooks including The Musical by Robert Kislan.

Third-year students receive ensemble and individual coaching in voice. Vocal anatomy and physiology is studied as well as vocal health and how to keep a voice healthy for performing and life. Students will study auditioning techniques and the use of subtext monologues for acting a song. Juniors study and interpret the book Auditioning for the Musical Theatre by Fred Silver throughout the year. Every 9 weeks students will have the opportunity to showcase their work in classroom recitals. Music theory instruction is ongoing, learning compound rhythms and intermediate sight-reading.

Fourth-year students receive ensemble and individual coaching in voice with a greater emphasis on repertoire selection for outside auditions for college and future career choices. Students have the opportunity to perform their collected repertoire in classroom recitals and other outside events. There is advanced work on character analysis, song history, and subtext monologue for each of their chosen songs. Seniors interpret and study the book On Singing On Stage by Julia Cameron. The year's work is presented in the Senior Audition Showcase in January and the Senior Recital in May.

This course is a basic introduction to a variety of styles of dance and dance class etiquette. The class stresses basic techniques in ballet, tap, and jazz, as well as proper strengthening and stretching techniques. Dancers learn basic kinesthetic and spatial awareness with others, and to communicate using proper stage terminology and directions. The class will perform as a group in the spring dance concert.

This course focuses on daily technique in a variety of styles of dance, including ballet, tap, jazz, and theatre dance. The students perform basic jazz technique including jazz center warm-up, progressions, turn and leap combinations, and jazz pirouettes. Basic tap technique include shuffles, flaps, buffalos, maxi-fords, and drawbacks. The students express ideas and emotions through movement and work on stage presence and style. The class will perform as a group in the spring dance concert.

This course builds on daily technique in a variety of styles of dance, including ballet, tap, jazz, and theatre dance. The students work to understand ballet, jazz, tap, and theatre dance combinations by observation, imitation, and verbal instruction. This enables students to prepare for musical theatre dance auditions for college or performances. The class will perform as a group in the spring dance concert.

This course continues to build on daily technique in a variety of styles of dance, including ballet, tap, jazz, and theatre dance. The students will practice learning combinations of different styles quickly and correctly and preparation for college and professional auditions. The course utilizes mock auditions and audition scenarios as a tool for the students' understanding of the process. The class will perform as a group in the spring dance concert.