The perks of marching to the beat of your own drum 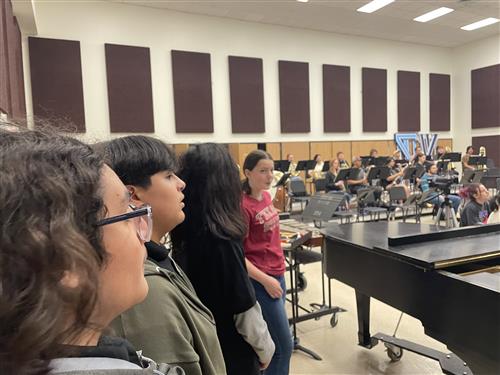 Marching to the beat of their own drum is taking the Krueger Middle School band to some pretty cool places.

Forty-nine band students recently had the honor of performing the National Anthem and pre-game show at the AT&T Center while the San Antonio Spurs played the Chicago Bulls. Returning to the court for the National Anthem is something Krueger seventh grader Grayson Hanchey will never forget.

"It's a once-in-a-lifetime opportunity to play the national anthem at an NBA game. You get to be on the court with some of our country's greatest athletes, and the Krueger Band and I were privileged to do so. You could even have a chance of being on national television! I know that I had a great time and I hope the rest of the band did too.”

The Krueger Steel Drum Band has also been on the move. The group recently traveled to San Marcos to attend the Texas State University Panorama Steel Band rehearsal. Students were greeted by Professor Genaro Gonzales and invited into the classroom for the university’s steel band class. Members were able to get history about the instruments, while watching and playing alongside Texas State students.

The Krueger Band is under the direction of Victoria Watson and Audriana Garcia.