Walzem parents sew for a good cause 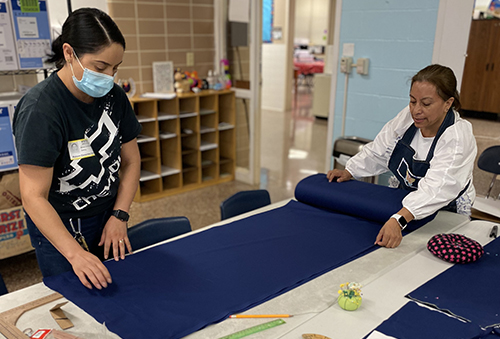 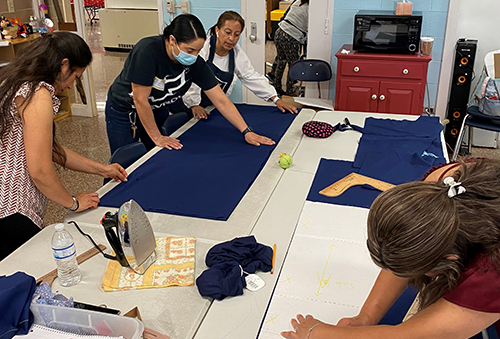 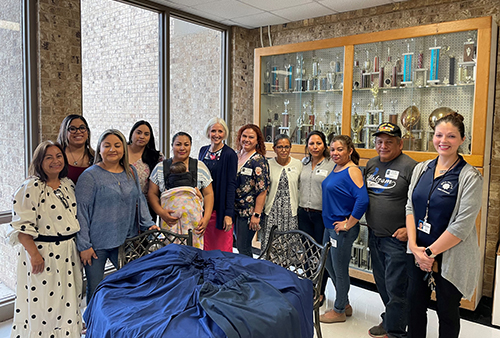 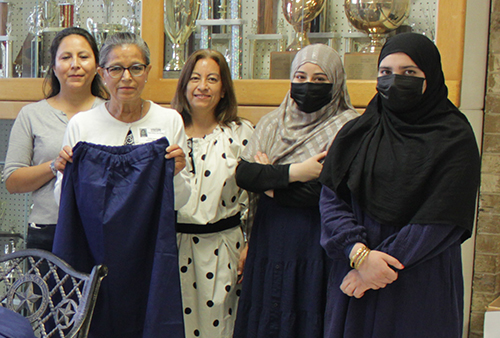 North East ISD is as much a family as it is a school district. When parents at Walzem Elementary School heard about an urgent need for skirts for some students at Jackson Middle School, they didn’t hesitate to roll up their sleeves and thread their needles.

“We’ve recently had an influx of refugee students and culturally, [when they dress] they have to be covered,” said Zelvia Castillo, Jackson Family Specialist. “I have a lot of school uniforms that have been donated but they are all pants and shorts, so it’s been very difficult.”

Jackson has almost 40 Afghanistan refugee students enrolled with more coming almost every week. But finding long, navy blue skirts that are in line with the school’s uniforms was not an easy task.

“My principal, Mrs. Deason, and I were spending our own money to buy some, but it was getting pricey,” said Castillo. “That’s when our Family Engagement Director Araceli Dominguez reached out to the parents at Walzem.”

“Araceli got in touch with me about using our sewing class,” said Nelly Alvarez, Walzem Family Specialist. “Mrs. Reyes is a professional seamstress and she has been giving sewing classes every Tuesday to our parents. They were all more than willing to help when we talked to them about it.”

With fabric donations and eager parents ready to help, they went right to work. They sewed skirts during their sewing class over the past few weeks, with some even taking them home to finish. These amazing men and women include sewing instructor Catalina Reyes, and parents Margarita Lazo, Maria Del Carmen Franco, Kenia Garcia, Patrick Hernandez, Alma Hernandez, Manuela Calvillo, Maria Calvillo, Maria Hernandez, Clara Ochoa and Sara Haws.

But the community effort doesn’t stop there. Walzem also reached out to its sister school Encino Park Elementary School, and their Boys to Men Club held a fabric drive to help with the effort.

“It was all a huge collaborative effort from different schools in the community to make sure that the girls had the uniforms that they needed,” said Alvarez. “And our principal, Mrs. Washington, and our Assistant Principal, Mrs. Jauregui, have been beyond supportive in getting us whatever we needed as well.”

As of today, these parents have made close to 40 skirts for the girls at Jackson. And so, during the last week of school, they made a special trip to Jackson to present the finished skirts to Jackson staff and students. Because even as the school year closes, the need for these uniforms never stops.

Maryam Ahmad Zai was one of the students on hand for the donation drop off. Still working on her English, she was a little shy but shared her appreciation for the gift.

And as long as these parents can sew, they are happy to keep helping #theNEISDway.