Why football is so important to this principal

There’s just something about football in Texas. It’s bigger than the game. Student athletes, cheerleader and band members learn life skills and lessons. It brings communities together. On the sidelines you’ll see mascots in costumes cheering on the team.

But at Krueger Middle School football games—that costumed cheerleader isn’t just a big falcon -- it’s also the principal—who’s not afraid to don a costume if it will get her students excited about school.

Cynthia Rubio has been the principal at Krueger for eight years now.

Football games are one of her favorite parts of the job.

“Maybe it’s the coach in me. But I love football games. I started as a coach and a teacher. I like being on the sidelines and showing my students support—win or lose—I am rooting for them. I am there for them. Students don’t always have that.”

This is Rubio’s 25th year with North East ISD.

During her time, she has gotten the opportunity to root for kids at Nimitz Middle School, where she started, Eisenhower Middle School and Churchill High School.

But being a pillar and a leader at NEISD was no accident.

She dreamed about being a part of our District.

“I grew up on the east side of town. When we would play North East, I would see that they just had more in every aspect. Whether it was volleyball, basketball, cross country -- I always felt NEISD had more resources. When I started student teaching, I asked to be placed at NEISD.”

And she’s been here ever since—living her dream—and helping students reach for theirs.

She loves Krueger. She sees herself in her students. She wants them to know they can reach their goals. It’s going to take work and discipline…but she’s living proof it can happen.

“I know it’s hard for some of our students to come to school. I was just like them. But I had a coach that made me believe I was fast. I had a science teacher that made me really understand how to do chemistry. I made it through as a ‘C’ student, but look at me now. It takes discipline and hardwork and somebody confident in your life. I try to help students believe they are going to make it further. There is a trajectory for them.” 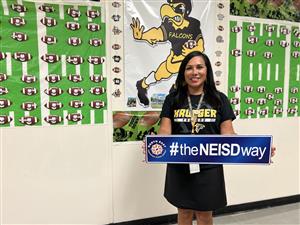 Rubio suggests she wouldn’t be as successful as she is, and neither would her students, if it wasn’t for her “assistant coaches”—all those people who support her and Krueger students day in and day out on campus.

Visit neisd.net/tellyourstory to tell us about a principal who has positively impacted your life.