Birds of a feather practice together #theNEISDway

For the second year in a row, the Krueger Middle School Falcons and Ed White Middle School Eagles hit the practice field together.

They may be fierce rivals on the football field, but they won’t always be opponents. In a few years, they’ll be teammates at Roosevelt High School. This concept inspired coaches at Krueger and Ed White to hold a joint practice,so they hit the ground running when they become Rough Riders.

“What’s most exciting about our joint practices is seeing both coaching staffs encouraging and coaching up all athletes regardless of which school they attended,” said Luis Bueno, Krueger Athletic Director. “It’s good to cover, block, tackle and compete against different players who they haven’t seen in prior practices.”

Each team trades off on hosting the practice. This year, it was held at Ed White, where Athletic Director Jorge Garcia was excited to watch the players locked in and learning alongside each other. 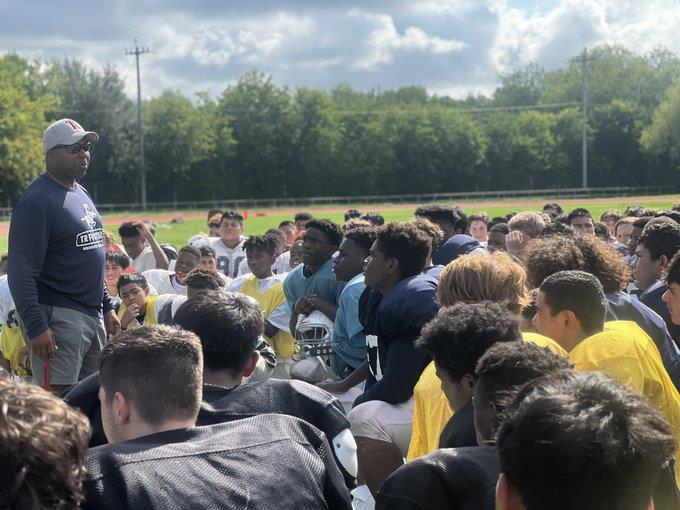 “There are so many advantages to having our joint practice,” said Garcia. “All of the student athletes have an opportunity to be coached by both coaching staffs. What was even better was the respect the student athletes showed to the opposing school coaches. We share the same playbook and we coach our kids the same Xs and Osand terminology so they are all on the same page with the high school coaches.”

What’s good for the Eagles and Falcons is good for the Rough Riders. So much so that Roosevelt Head Coach Matt Carroll and his team were at practice to encourage both teams before their season begins.