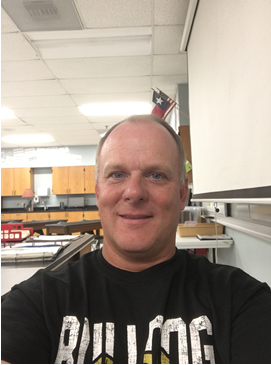 Mr. Froboese is a graduate of UT, having earned his B. S. in Education in 1989. After graduation, he spent his first 9 years teaching 6th grade science at Eisenhower Middle School. In 1998, he moved to Bush Middle School in an effort to be closer to his family. He has been at Bush for the past eighteen years having just completed his 28th year of teaching. Mr. Froboese currently lives on his family ranch with his lovely wife Jo Anne and an almost 8 year old, Grant. Mr. Froboese also has twin sons who are in college.  John is a junior at Texas Tech and Kevin is a junior at UCLA.
Our family moved in to our dream home on the ranch on February 20, 2010.  Life has been great on the ranch in our new home, although Mr. Froboese did spend most of his summer working on the family garden and various tasks on the ranch.  In his spare time, Mr. Froboese enjoys spending time with his wife and sons. When not busy with his family, he also spends time ranching, exploring caves, hunting, and restoring various family heirlooms such as his 1950 Farmall M tractor and his 1950 Chevrolet pickup.  Currently Mr. Froboese is working on restoring his 1939 Farmall F-14 tractor.  In the summer of 2012, Mr. Froboese added one more tractor to his collection, a 1952 Farmall Super M.  The tractor was originally owned by Mr. Froboese's father and was reacquired.  Hopefully it will be up and running soon.  Finally, Mr. Froboese is currently using his D6M bulldozer to clear brush on his family ranch.