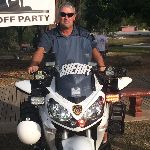 Originally from the little town of Schroon Lake New York in the beautiful Adirondack State Park, Mr. Beck attended SUNY Cobleskill Ag and Tech for two years where he played baseball and basketball for the Tigers.  After graduating with an AA degree, Mr.Beck transferred to Catawba College in Salisbury, North Carolina where he played baseball and earned a BA degree in Education.
After graduation, Mr. Beck taught elementary PE in Kannapolis, NC before returning to the Adirondacks to teach and coach at Ticonderoga High School. While teaching in Ticonderoga, he met his future wife Abbie.  They have been married for 28 years.
Coach Beck moved to Texas in 1993 and began working at Bradley Middle School in 1994, and became Athletic Coordinator in 2006.

At the end of the 2021 school year, Mr. Beck stepped down as Athletic Coordinator and moved to Colonial Hills Elementary School, home of the COUGARS, to teach PE.
He and his wife Abbie have 5 kids; Emily 25, Zach 23, Cody 20, Luke 17 Kendall 16.  He enjoys spending time with his family going to church, camping, fishing, and looking for new swimming holes to visit during the summer break.